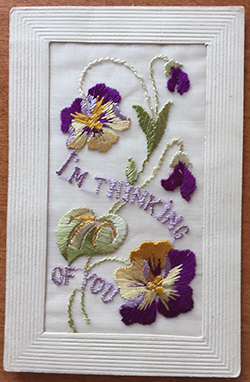 The families of the troops relied heavily on letters and communication from their loved ones during the war, and Queenie was no different. From 1914 to 1918, postcards were sent throughout the world and had worldwide popularity. Families and soldiers avidly sent and collected these small non-descript notes from home and cherished them with love. Canadian soldiers waited over three weeks to a month for news from home, as the mail was processed through England first.

During the First World War, news always came from soldiers who were ‘from’ the front, but never who were ‘at’ the front. No matter how the mail made it from soldier to family, any news, even a signature or small love message, buoyed feelings of well-being and safety.

One of the most popular souvenirs of WW1, first produced in 1907, were silk postcards. With so many soldiers arriving at the front, postcards gained much popularity in 1915. As part of a cottage industry, mostly made by women, it’s estimated that up to ten million cards were produced during the war. Silk mesh strips were used to hand embroider various designs, repeated up to twenty-five times on a strip. The embroidered art pieces were then sent to a factory. They were mounted and glued onto embossed-bordered cards, made into postcards and greeting cards.

The backs were printed with, ‘Fabrication Française,’ or ‘Carte Postale,’ with space for a message and address. Some were blank on the back. Often the cards were inserted into a protective sleeve or envelope and sent along back home with a letter.

Civilians seeking out a living generally bought the postcards from the factories and made sure they made it into soldier’s hands in the battlefield. Costing as much as three times the daily pay of an average soldier, a single card was not inexpensive, but they had the appropriate sentiments someone would want to send to a loved one back home. 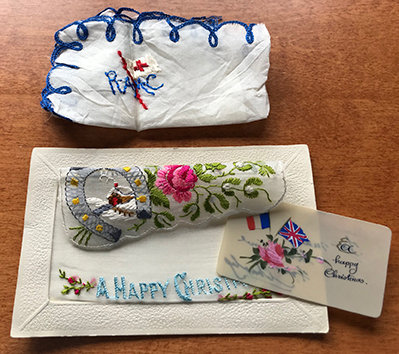 There were the usual Birthday Greetings, Miss You, Thinking of You, and Friendship messages. A mounted fabric pocket could hold a small sentiment card or one with a festive greeting. Soldiers also purchased silk hankies to insert into the pocket of the card. These often had their regimental badge embroidered across it or the flags of the country they were in. A “From the Front” message with festive holly and flags of both Britain and France were usually stitched on them too.

Mail processing was a huge part of the war. By 1917, twenty-five tons of outbound mail to the Armed Forces was being sorted every day. Up to twelve million letters and newspapers were delivered each week to two-thirds of the troops in France. These amounts would double at Christmas time and didn’t include all the parcels that also flowed through the system.

Included in the deliveries were three kinds of postcards. There were the official ‘field postcards,’ which were inexpensive, and had a commercial picture on the front. In this category were the embroidered keepsake cards, which were pricier. Mass-produced ‘military issue’ postcards were free and convenient. ‘Illustrated postcards’ were great for all tastes and occasions with their varied designs. It was the hand-embroidered cards, though, which were most popular with the British and Canadian troops and eventually the US troops in 1918.

Postcards were perfect because sentiments could be written quickly when a soldier’s time was limited. Security force members could monitor the messages, ensuring no warfare intelligence was leaked or came into the hands of the enemy. Those letters and cards that were cleared made their way across the seas into the hands of loved ones who eagerly awaited their arrival.

Through the eyes of a little girl awaiting news from Daddy, who has gone off to war, here is Queenie’s story:

A tiny girl climbs up over the edge of a handmade rocker sitting beside a frosty living room window. Fiddling with the hem of her knit jumper, she swings her legs back and forth. Soon tiring of the motion, she pulls her legs up, kneeling onto the seat, and leans her forehead against the cold glass, wondering why the letter carrier hasn’t arrived yet.

February 12, 1916, is Queenie’s 4th birthday, and if it weren’t for the postal carrier delivering ‘Post Cards from The Front,’ how would little Queenie know Daddy is safe and thinking of her on this special day?

There’s a sharp rap-rap-rap against the door. Queenie skips across the floor and uses all her might to pull it open. She giggles shyly at Miss Colleen, the postwoman, who took over her brother’s job of delivering the mail right after he joined the forces and went off to war. After church last week, Queenie heard Mammie telling the ladies all about it. Spying the full letter package in Miss Colleen’s hand, Sadie reaches up and snatches it away.

“Mary Jane! Mind your manners,” Mammie nods at Miss Colleen and eases the door shut. She holds out her hand, and with a quivering lip, Queenie drops the letter into it.

Queenie holds her breath, mouth tight, watching as Mammie slips her thumb into the letter and edges it along the fold, opening the end. As she turns it over, out falls a postcard. Queenie gasps, bending over to pick it up, but Mammie is too quick and grabs it. She gives it a glance front and back. A huge smile lights up her face, taking away the traces of tiredness that linger there.

“I believe this is for you,” she says with a wink.

With Mammies’ help, Queenie sits back on the rocker, the postcard pressed against her chest. Mammie slips the thick envelope into her apron pocket and kneels in front of her.

“There’s no alphabet on the back,” Queenie whispers. 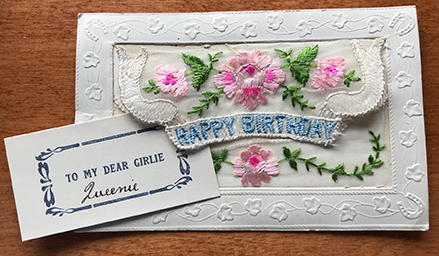 “Look, there are words on the front,” Mammie turns the card over. “See, it says Happy Birthday.”

Queenie’s small fingers dance across the blue embroidered words and the pretty pink flowers. Under the letters is a flap of silk that she lifts. Inside is a little square card. She pulls it out, shrugs her shoulders, and presses the card into Mammie’s hand.

“It’s stamped, see that? It says, ‘TO MY DEAR GIRLIE,’” Mammie points to the alphabet letters. “Look! Daddy wrote your name, ‘Queenie.’”

With the best gentle care a little girl can muster, Queenie takes the special card from Mammie and slips it back into the silk pocket, but only after she gives it a little kiss, right where Daddy wrote her name.

Queenie celebrated five birthdays when Daddy was overseas. She eventually grew into the rocker by the window while waiting patiently for Miss Colleen, whose brother never did come home to assume his postal carrier duties. Queenie treasures one postcard the most, and of course, the few more she receives from Daddy. 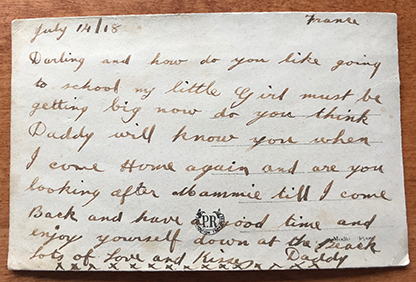 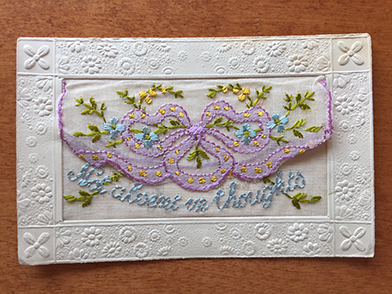 Her favourite is an embroidered postcard with pretty lilac ribbon stitches. It says, “Not absent in thoughts” and also has a flap with a tiny card hidden inside stamped with the words “Forget me not.” It wasn’t the front of this card that she loved so much, it was the message on the back, written in black ink, by a man’s handwriting, which read:

World War II postcards and love letters begin arriving in 1940 from her husband, William (Bill) Gagnon. She puts all the postcards, notes, and silk handkerchiefs from overseas into a tartan pouch, which has his regimental badge on the front. They sit nestled alongside the ones received from Daddy so many years ago.

Growing into a beautiful, strong, young woman, Mary Jane (Queenie) sits at her desk, awaiting the arrival of the postal carrier. Looking through her mementos, she plants a small kiss against each loving signature on the short stack of cards received from both Daddy and Bill, saying a silent prayer to add yet another embroidered postcard and hankie to her growing collection. 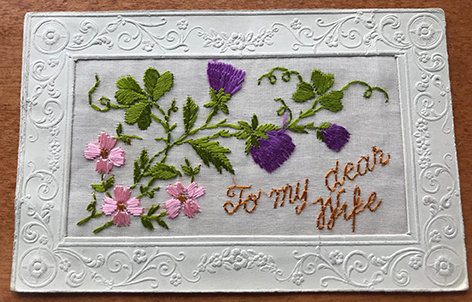 She glances at the old family rocker sitting beside the living room window and smiles with fondness at Mary Anne, her young daughter (my Mom). Long ringlets tied up in ribbons circle the child’s freckled face as she peers through the window, feet dangling, waiting on her fourth birthday for any news from Daddy who went off to war.